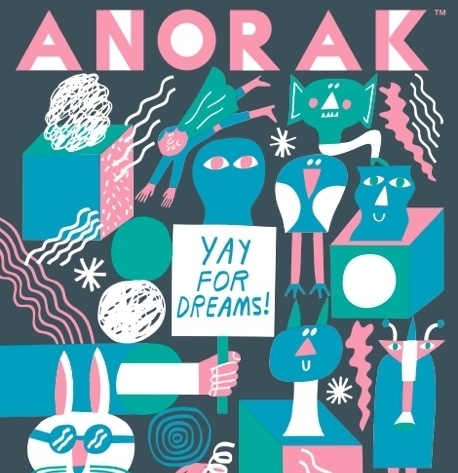 Anorak was launched in 2006 by Anorak Studio. Located in the United Kingdom, the publishing house was founded in 2006 by Cathy Olmedillas, formerly of The Face and Sleazenation. The magazine, billed as the 'happy mag for kids' is a unisex publication aimed at children between 6 and 12 years old.Olmedillas developed the magazine after realizing, as a new mother, that there weren't any titles targeted at children that she wanted to read with her son. As of 2017, the magazine has a per issue print run of 15,000.

Each issue is themed and designed to be kept and collected, like magazines of the past. Anorak features original artwork by artists including Jayde Perkin who points to the "range of styles" included in the magazine's art direction as a reason both adults and children can enjoy the publication. In 2014, The Guardian the publication one of the Top Five magazines for children.

Anorak Studio produces a sister magazine, Dot, which is aimed at children under five years of age.

Day 1
Introduction to the Happy Mags for Kids.
The history of Anorak and DOT and the joys of going back to our childhoods for inspiration.
In the afternoon we will do a workshop based on reminiscing and drawing the most fun episode of our childhoods.

Day 2
Story telling for kids.
We will take one story and explore many ways on how to bring it to life, through collages, drawing in various techniques and also exploring different layouts, from comics to single images.

Working to a theme: FAMILY.
We will explore the concept of FAMILIES and create a short story, non-fiction piece or a game based on that theme.